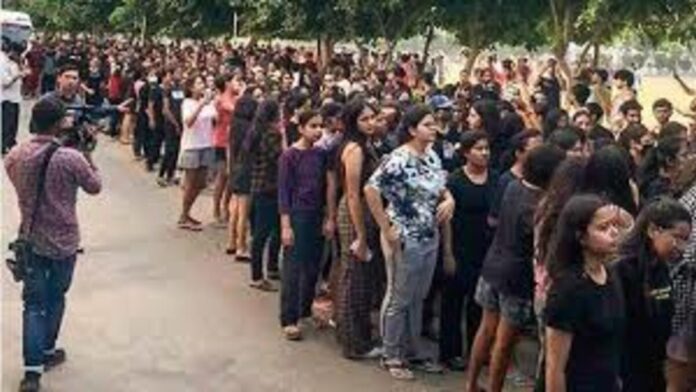 In relation with the Chandigarh University MMS incident, Sanjeev Singh, an Army veteran who was apprehended in Arunachal Pradesh, was in love with the student who was allegedly filming women taking showers in the dorm. According to reports, Singh informed the Mohali Police of his acquaintance with the defendant.

According to sources, the accused and the Army troops connected on social media and exchanged mobile phone numbers. It is yet unknown if the accused also gave Sanjeev Singh access to the videos. Sanjeev’s two mobile phones were found by the police.

The hostel manager questioned the accuser, an MBA student, and discovered that someone had been messaging her nonstop.

She was apparently conversing with Sanjeev Singh and he allegedly asked her to transmit the films and images, according to a later WhatsApp conversation. The chat’s transcript showed that the accused felt pressured to record the recordings. She even admitted to Sanjeev that by asking for the pictures and videos after she was discovered taking them, he had put her in an awkward position.

Sunny Mehta, the accused’s lover from Shimla, and another accused in the case, Rankaj Verma, who had asserted his innocence and said he did not know the two, have since submitted a request for release to the court.

According to his brother Pankaj, Rankaj told the police that he was not at fault and that the police had caught him because of his DP.

Today marks the conclusion of the girl’s, her boyfriend’s, and his friend Rankaj’s police detention. The forensic analysis of the girl’s laptop and mobile devices will show whether she took pictures and films, and the police are eagerly awaiting this information.

Massive demonstrations broke out inside the Chandigarh University campus on September 18 after students claimed that “private” and “objectionable” videos of a number of women dormitory residents had been posted online.

The Punjab Police have made four arrests so far in connection with the case. In order to get the woman to film other pupils, Sunny Mehta and Rankaj Verma allegedly threatened to release the woman’s private films.