Abhishek Banerjee All Over TMC’s Swift Against Partha Chatterjee 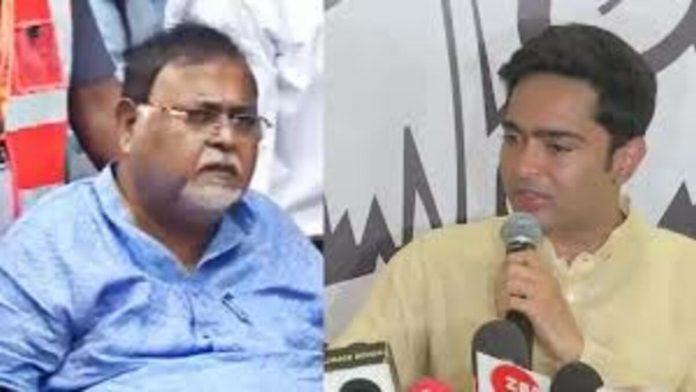 Within nine days of his arrest for a school recruiting scam, Partha Chatterjee was stripped of his position as a Cabinet minister, all of his party and government ministries were taken away from him, and he was suspended. Abhishek Banerjee’s fingerprints are all over the Trinamool Congress’s swift and extraordinary action against one of its top leaders.

Abhishek, the all-India general secretary of the TMC and a rising star, has been waiting in the wings out of respect for aunt Mamata Banerjee’s old guard. However, on top of other losses to the TMC, the embarrassment of Chatterjee’s arrest and the claimed crores pouring out of locations associated to him have made room for him to move in.

Chatterjee responded to the TMC’s action against him by expressing his displeasure on Friday. “Mamata made the right decision, but I was the target of a plot. Time will tell whether what the party did was correct or not, he said.

Abhishek had been given the main responsibility of assisting the TMC’s expansion outside of West Bengal in the days following the party’s triumphant return to power there last year. Due to the failures in Goa and Tripura, that project has faltered, refocusing Abhishek’s attention on Bengal.

He has taken on a public role recently as the TMC’s primary policy spokeswoman and troubleshooter, unhindered by his lack of seniority. He was the one who unexpectedly said that the TMC, which had assumed leadership in a combined Opposition candidate for president, would not support a common vice-president nominee. Mamata, who the leaders of the opposition claimed had promised to support them, was nowhere to be found.

Following Chatterjee’s dismissal as a minister on Thursday, Abhishek once more called a meeting of the disciplinary committee, when it was agreed that the senior politician would also lose his position as TMC secretary general.

The same day, Abhishek gathered individuals protesting the school scam, including job seekers, to reassure them that the government was with them. He had a meeting with them on Saturday.

Given that the party has never responded with such haste in such situations before, a top TMC leader acknowledged that they were astonished by the speed at which things moved against Chatterjee. “Even as calls from within the party for Chatterjee’s removal from the ministry increased, calls from the opposition grew louder. On Thursday morning, spokesman Kunal Ghosh (who can be seen standing near to Abhishek) requested that he be fired. According to them, the TMC’s reputation had already been damaged by the massive money recovered (from Chatterjee-related properties), and while his dismissal might not lessen that, at least people would know the TMC does not accept it, Senior party figures resisted, though. Then, Abhishek made a hasty judgment and was successful in persuading senior figures, including Mamata, that this was the only option available.

In reality, the Abhishek camp has worked hard over the last few months to portray their 34-year-old leader as a champion against corruption. This is set against the backdrop of allegations of coal smuggling against Abhishek and his wife Rujira.

Even Abhishek, speaking at the TMC’s July 21 Martyrs Day celebration, which is a major event on the party’s calendar, stressed that the party would punish wrongdoers.

Party leaders say it would be foolish to assume the nephew’s determined stride now doesn’t have the aunt’s endorsement, despite earlier this year, around the time of the civic polls, there being rumors of some animosity between Abhishek and Mamata. For instance, Mamata has not reached out to Chatterjee, despite the fact that he is one of her closest and most senior lieutenants, after the recovery of allegedly millions of dollars rendered his position unsustainable. According to sources in the Enforcement Directorate, which is in charge of keeping Chatterjee, Mamata disregarded his frequent calls.

In contrast, Mamata held a dharna to call for the release of prominent TMC figures who had been detained by the CBI in May 2021 in connection with the Narada sting investigation, including two ministers. Other politicians like MP Tapas Paul, who was released on bail following his arrest in the Rose Valley Ponzi scheme case, and MP Sudip Bandopadhyay, who was also detained in the case, were not targeted by the TMC. More than a year after his detention in the Sarada chit fund scam, Madan Mitra is still a minister.

“The message is clear, especially to old guards at the top,” a seasoned TMC leader declared. The party will no longer be there to grasp your hand if you fall. Abhishek was able to take command when the money was recovered, and by acting quickly, he is seen to have lessened the harm to the party’s reputation. There are those leaders that are unhappy and afraid, but who will admit it?

This is a change from January, when the old guard voiced their concerns to Mamata over Abhishek’s Covid attitude that was different from the TMC government’s and the promotion of his “Diamond Harbour” model (Diamond Harbour is Abhishek’s constituency). Abhishek was perceived as bringing to the TMC Prashant Kishor’s I-PAC, which had offended many of them with its inputs.

After eventually dissolving all of the TMC’s national portfolios, Mamata appointed a new national working committee as chair. She had also disregarded Abhishek’s recommendations that relatives of people with a tarnished past be denied voting privileges in local elections, that the party adopt a one-man, one-post system, and that religious activities be postponed due to Covid limitations. At the time, his remarks on “coercion-free” civic elections were interpreted as endorsing the Opposition’s charges of TMC haughtiness.

The TMC needs to fire more TMC leaders, according to the opposition in Bengal, who claimed that the action against Chatterjee was insufficient. Sujan Chakraborty, the leader of the CPM, said: “The money we have seen is simply the tip of the iceberg. Millions of rupees were stolen. That money needs to be retrieved. We will keep moving while it happens.

“BJP’s large protest against #SSCScam shook Mamata Banerjee’s citadel and forced her to fire corrupt Partha Chatterjee from the Cabinet and party positions, after digging in heels for as long as she could,” BJP leader Amit Malaviya claimed credit for Chatterjee’s suspension in a tweet.

jav uncensored leak FC2-PPV-3124595 [Complete amateur real video #96] Real virginity lost... #100% real REAL-812 Sumire Kuramoto, Who Has Been Developed Into A Super Sensitive Body So ​​That Love Juice Overflows No Matter Where It Is Touched By My Cousin In The Nursery Room I Hate Day After Day FSDSS-527 First release! - First Gonzo! - First Slut! - First Consecutive Iki! - Sexual Development 3 Production Special! - ! - ! - Chiharu Mitsuha BOBB-356 Living With A K-Cup Girl And Having Sex With Her Breasts I Can't Refuse If You Ask Me! - A convenient girlfriend and breasts, one week diary of cuckolding and fucking Boin "Ena Koume" Box2 BLK-612 A Vulgar Vulgar Woman Who Found It In Akabane Alley