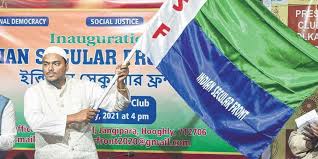 Furfura Sharif cleric Abbas Siddiqui launched his new political party the ‘Indian Secular Front (ISF)’ on Thursday in a press conference in Kolkata. He said his party is open to all except BJP as he thinks BJP is dangerous to ally with.

Democracy, Secularism and Justice are the foundation of the Indian Secular Front said Siddiqui. It will contest elections on 294 seats in West Bengal assembly polls where Mamta Banerjee holds 222 seats and the state will go under polls in April-May 2021.

During the launch of his party he described his party as”The party’s main objective would be to stand and fight for the lost Democracy, Secularism & Justice in the state, to fight for economic freedom & equality. We will contest election as a front, as of now I will say on all 294 seats. We will, later on, see about an alliance. I haven’t thought about it now”.

Talking about uniting with TMC he said, “I have kept my option open of joining a front with any party except BJP. It’s not my job to work for the survival or interest of TMC & Mamata Banerjee. To stop BJP all parties must unite. Whether I will join hands with Tmc or not is hypothetical, but its upto them to initiate. I think BJP is dangerous for the nation. We will not ally with them.  I don’t want to be king, I want to be the king-maker.”

The chairman of Bengal Imams’ Association criticized Owaisi by saying that Owaisi’s community does not need any Muslim leader from outside and also they will not allow the division of Muslim votes in West Bengal.

However, Owaisi countered this charge by saying that these undivided Muslim votes have not raised any profit for the community for about 70 years. He added further 37 per cent Bengal’s prison population is Muslim and the community consists only 27 per cent in the total population of the state.