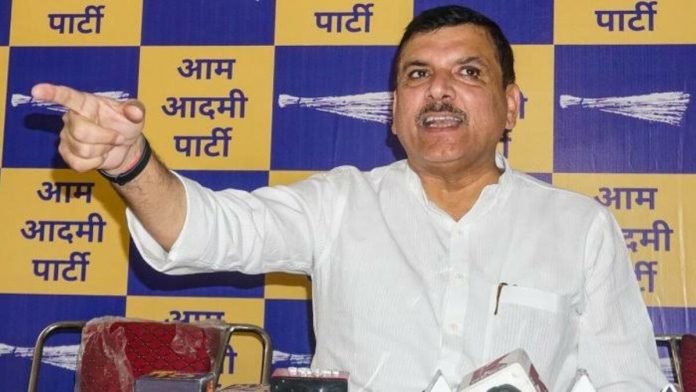 The AAP claimed on Thursday that Prime Minister Narendra Modi “betrayed” the country’s youth by announcing the ‘Agnipath’ scheme for armed services recruitment, and demanded that the decision be reversed.

Sanjay Singh, the party’s Rajya Sabha MP and spokesperson, also urged the country’s youth to “wake up” and “express their voice in a democratic manner” against the Centre’s decision, stating that those who join the armed forces under the program will be “left nowhere” after serving for four years.

“Prime Minister Narendra Modi’s Agnipath army recruitment strategy is a glaring betrayal of the country’s 20 crore youth. The country’s youth have been stabbed in the back by the government “Mr. Singh retaliated.

He branded the recruitment initiative as anti-youth, claiming that it will mainly assist private businesses by meeting their demand for trained security people.

The introduction of the initiative, according to the AAP leader, has aroused countrywide uproar because it came as a shock to the country’s youth, who had been expecting the central government to begin recruiting for the armed services.

This Agnipath initiative follows a succession of jumlas by Prime Minister Modi aimed at providing jobs for the country’s youth, which helped the BJP win the 2014 and 2019 Lok Sabha elections, he said.

“After four years of service under the Agnipath program, you will have just two options in life: either commit suicide due to unemployment or go for a position as a security guard in private firms,” the AAP leader alleged.

Mr Singh asked that the government cancel the policy, stating that if his demand is not met, the Aam Aadmi Party (AAP) will raise the issue “with full force” from the first day of the 2019 Parliament Session.

He also urged the country’s youth to speak out against the schemes, assuring them of the AAP’s support, stating that Delhi Chief Minister Arvind Kejriwal has already done so “in your favor.”

“I want to tell the youth of this country to wake up and fight for their rights. We have the right to raise our voices democratically in a democracy. Claim your rights by raising your voice. We’re here for you, “Mr. Singh explained.

“The administration will have to bend down in front of you, just as it did after the farmers’ year-long agitation (against the three farm laws),” he added.

Mr Kejriwal’s reaction came only hours after he spoke out in support of defense job applicants denouncing the Agnipath scheme, urging the central government to provide them the opportunity to serve the country for the rest of their lives, not just four years.

The Agnipath initiative, which was unveiled on Tuesday, aims to recruit soldiers for four-year contracts in the Army, Navy, and Air Force.

“An appeal to the federal government: Young people should be given the opportunity to serve their country for the rest of their lives, not just four years. Those who have reached the age of majority due to a shortage of Army recruiting in the last two years should also be given an opportunity “Mr. Kejriwal stated in a Hindi tweet.

Mr. Kejriwal went on to say that the youth are “unhappy” and that the Agnipath initiative is being opposed across the country.