Veteran actor Unnikrishnan Namboothiri debuted with Desadanam in 1996 and had played a pivotal role in Pammal Sambandan. 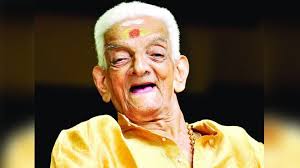 Unnikrishnan Namboothiri a Malayalam veteran actor died at the age of 98 on Wednesday at a private hospital in Kannur.

He had tested positive for covid-19 recently for which he was getting treatment in the intense care unit (ICU) of the hospital.

However, he was sent home on Tuesday after his covid-test came negative, but on Wednesday again his health deteriorated and he was taken back to the private hospital where he died.

Actor Unnikrishnan debuted with Desadanam in 1996. He later became a household name for the MalAyalam film audience for his role in Kalyanaraman (2002) as a clever grandfather. He had also played a lead role in Kamal Haasan’s hit comedy drama Pammal  Sambandam which also got released in 2002.

Chief Minister of Kerala Pinarayi Vijayan also shared a post on Facebook calling the demise a loss, “Unnikrishnan Namboothiri was an actor who excelled in expressive acting. He was known to be a distinct personality in the field of cinema for his age-old interest and confidence for the same. A fellow leftist, he had closely associated with the CPI (M). His demise is a great loss to the artist fraternity. This is a personal loss for me as well. The gap left by his death in the cultural space, cannot be easily filled.”

A director Rajiv Menon also tweeted about the same, “RIP #UnnikrishnanNamboothiri, brought the Uyee Uyee thaatha of #kandukondainkandukondain to life and made it one of the most loved grandfather character in Tamil cinema ! We will miss your mischievous eyes which could turn into despair Ina flash.”

Unnikrishnan was a native of Payyanur and had two sons PV Kunjikrishnan and Bhavadasan and two two daughters Yamuna and Devi.