A Starry Battle Between BJP And TMC

Those who are launched by Trinamool in past five years have been the winners and it is the power of TMC which BJP is likely to cheat in these assembly polls. 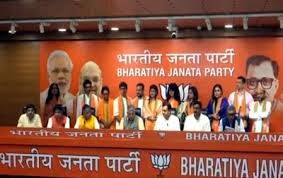 The battle between the TMC and BJP has now heated up more as now even Tollywood is also joining BJP. This comes after a dozen of actors and actresses on Wednesday joined BJP just a few days ahead of the declaration of the dates for the Bengal assembly elections.

The actor Yash Dasgupta is said to be good friend of Trinamool MP and actor Nushrat Jahan whom Mamata Banerjee launched as the face in 2019 Lok Shabha elections.

There are a few other actors who thanks TMC for their debut in politics including Dev Adhikari, Sandhya Roy and Mimi Chakraborty.

Those who are launched by Trinamool in past five years have been the winners and it is the power of TMC which BJP is likely to cheat in these assembly polls.

When Dasgupta was asked about joining politics he said it’s up to party but he is standing for bringing a difference.

“I think the BJP has been encouraging the youth, believing that youth can bring change for the better. I think if you want to change the system you must be part of it,” said Dasgupta.

“I am Didi’s younger brother and will remain so. This morning I messaged her saying I was joining BJP, sought her blessings and conveyed my regards to her,” said Dasgupta exressing his fondness for Mamata Banerjee and rivalry towards BJP.

However, it is not clear whether Mamata Banerjee has responded to him or not.

It is not clear whether those actors who have joined politics will contest or not but they are likely to be star campaigners for the party.

Apart from BJP, Trinamool is also inviting stars to be either its candidate or star campaigner. The biggest star recruited by TMC so far is Dipanker De who have acted in many films directed by Satyajit Ray and many other big directors.