The accused caught near a bus stop in Pitampura, Delhi on Tuesday, two swords recovered from his residence. 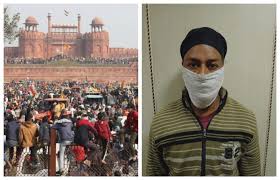 One of main accused behind the violence on Republic Day at the iconic Red Fort has been arrested by a team of Delhi Police Special Cell on Tuesday.

A 30 year-old Maninder Singh alias Moni was wanted by the Delhi Police since the day of Republic Day violence. His videos and photos went viral after the violence in which he was seen swinging swords at the Red Fort during the tractor rally conducted by the protesting farmers against the three farm laws passed by the Centre.

Maninder Singh was a resident of Swaroop Nagar in Delhi. He was caught near a bus stop in Pitampura, Delhi on Tuesday. Two swords were also recovered from his residence after his arrest.

His arrest comes a few days after the arrest of another accused Iqbal Singh in the Republic Day violence. Iqbal Singh was arrested on February 9 from Hoshiyarpur in Punjab.

Apart from Maninder Singh Delhi Police was also in search of Iqbal Singh in connection with the violence. He was mainly accused of instigating crowd near the Lahori Gate for inciting violence. The Police has also announced a reward for any information on his whereabouts.

Last week the Delhi Police’s Crime Branch took both the Iqbal Singh and Punjab actor Deep Sidhu to the Red Fort for recreating the chain of events happened at the Red Fort in tractor rally on Republic Day.

On Republic Day tens of thousands came on roads on bare foots to show their agitation with breaking barricades before the proposed time, there was a huge clash between the police and the farmers.

The farmers conducted a tractor rally for their demonstration against the Centre’s three farm laws. They also farmers entered the iconic Red Fort by driving their tractor and some of them swung swords and hoisted religious flags.

Many FIRs were lodged in connection with the Republic Day violence in which many farmers’ leaders were also named following which further investigation and arrests are on.