A Jolt To BJP, As Tripura Royal Forms Alliance With BJP’s Ally

The Tripura royal has formed the alliance with the Indigenous People's Front of Tripura (IPFT) of BJP. 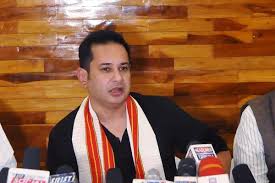 Tripura royal Pradyot Manikya Deb Barman has given a shock to BJP by forming an alliance with one of its allies after two years of leaving Congress over dissidence with the party on the acts of Citizenship Amendment Act (CAA) and National Register of Citizens (NRC). This move comes just ahead of the state local elections.

The royal has formed the alliance with the Indigenous People’s Front of Tripura (IPFT) of BJP.

The state is going to have its tribal council polls. However, these elections were planned to be held on May 17, 2020 but had to be postponed because of emergence of Covid-19 pandemic.

Under Pradyot Manikya’s leadership, they will contest the upcoming Tripura Tribal Areas Autonomous Development Council (TTAADC) polls, which runs under the 6th schedule of the Constitution.

The saffron party got aware on Friday about this when they saw almost every regional party to form alliance with TIPRA.

Before leaving Congress Manikya Deb was the state president for the Congress but he however left the party in 2019. His demand have always been for an independent state of Tripura for its indigenous tribal communities.

Along with Manikya Deb the IPFT too have always demanded for a separate state because of which it has achieved an importance since 2009.

Both the TIPRA chairman Manikya Deb and IPFT chief and state revenue minister NC Debbarma in a press conference told that the alliance are not just formed for fighting the local elections but also for the development of the tribal communities of the state of Tripura. The tribal population in Tripura is 30 % of the state population.

Pradyot Manikya Deb Barman has also told that he is ready for an alliance with both the Congress and the BJP if they are ready sign the agreement for supporting the demnand for an independent state of Tripura.