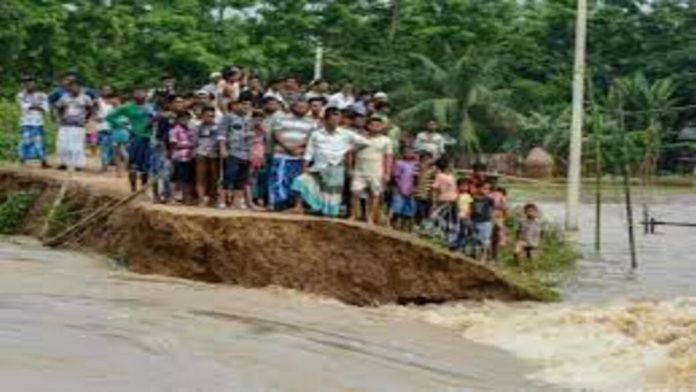 The flood situation in Assam worsened on Sunday, with nine more people killed, including three children, bringing the total death toll to 71. Six people died in floods, while three others died in landslides. Cachar district was the site of all three landslide-related deaths.

While four persons have gone missing in Dibrugarh, one person has gone missing in each of the districts of Cachar, Hojai, Tamulpur, and Udalguri. As a result, the overall number of people killed in this year’s floods and landslides has risen to 71.

According to ANI, ACS-District Development Commissioner Udayaditya Gogoi said, “Some villages along the Brahmaputra River’s bank have been flooded. A total of 2.41 lakh people are affected, with a total crop area of 5,174 hectares. We’ve set about 30 aid camps and are continuing our rescue efforts.”

The anti-poaching camps of Kaziranga National Park have been overwhelmed by flood waters as a result of the continuous rain.

The relevant district administrations have set up a total of 744 relief camps, with over 1.86 lakh people taking refuge. Villagers who have been displaced by the floods have either moved to relief camps put up by the district government or are camping on the roadways.

“For the past three days, our houses have been flooded, and we’ve been stranded on the highway.” We’re already in a bad situation, and if the rain doesn’t stop, things will get significantly worse. Rekib Ahmed, a flood victim in Kamrup’s Rangia, stated, “We have not received any relief items from the government.”

Over 29.28 lakh domestic animals and poultry have been affected by the floods, which have buried 107370.43 hectares of crop land across 25 districts of the state. The people, who have lost everything in the flood, complain that the district administration has not provided them with any assistance materials. They are subsisting on the remaining rations and fishing in the floodwaters.

“The village situation is dire, and we’ve been living on the highway for the past 5-6 days.” Another flood victim, Uttam Nath of the same district, alleged, “We have just received rice in the name of relief.”

“It’s been four days and the water level is still increasing,” said Abdul Hakim, a flood victim in Kamrup’s Balabari hamlet. Our entire community is flooded, yet we have yet to get any relief supplies. If the rain continues, the situation will deteriorate even more. The floodwaters have wrecked everything. We’re making do with the little food we have left and selling fish we’ve caught in the floodwaters.”

Meanwhile, the India Meteorological Department (IMD) has forecast further rain in Assam and Meghalaya through Thursday, as well as extremely heavy to extremely heavy rains in the following 48 hours. The weather service has forecast additional rain for the region, and people are concerned about their condition if it continues to pour.

“Some people have taken refuge in schools.” The National Highway was also flooded. The floods have caused widespread devastation. “Now we’re scared about what would happen if it rains again,” Abdul Malik, a flood victim from Kamrup’s Borbola hamlet, said.

At Nagaon’s Kampur, the River Kopili is flowing above its danger level. Other rivers, including the Brahmaputra, Beki, Manas, Pagladia, Puthimari, Kopili, Jia-Bharali, and Subansari, are also overflowing their banks.