The measures taken by the Bangladesh administration will almost seal off the country that will begin from Wednesday. 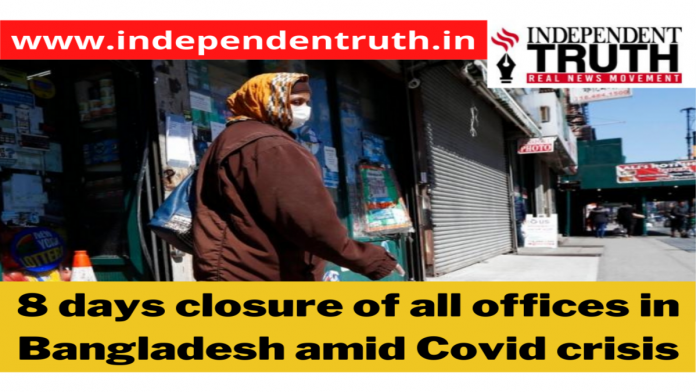 Amid a high surge in Covid-19 cases in Bangladesh the country on Monday ordered for an eight-day closure of all the offices and halt on national and international transport.

The measures which will almost seal off the country will begin from Wednesday, said the country administration.

Bangladesh with a population of 160 million people has reported 6,84,756 cases so far with 9,739 death toll. But the numbers have been rising by seven times for a month now.

The hospitals in the country are now complaining that they are being now overloaded with the daily cases and deaths.

“All government, semi-government, autonomous and private office and financial institutions will be closed,” a cabinet statement said.

Apart from national and international other transports like maritime, bus services and rail will also be halted.

All stores other than those engaged in supplying food will remain closed. However, factories may remain open if those who work in factories manage to travel by their own transport.

The closure will end on April 21, told the cabinet.

“There is no alternative now to this in order to curb the Covid-19 surge,” said a junior minister for public administration, Farhad Hossain.