7 Other States Records Spike In Cases Followed By Maharashtra 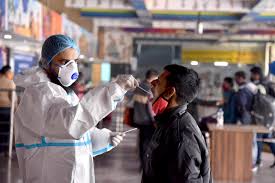 Along with Maharashtra 16 other states and UTs have registered a rise is covid-19 cases since last week. Although the rise was marginal in half of those 16 states and UTs either because of the less numbers or the marginal increase was lower than 5%.

But the rise in the other half of those states and UTs have to be closely watched on the basis of their last week caseloads. When Maharashtra who is in headlines since a week recorded surge of 81% in last week, Punjab recorded 31%, MP 43%, Chhattisgarh 13%, Haryana 11% and Jammu & Kashmir 22%.

Delhi sees a 4.7% rise in cases, Chandigarh saw a spike of 43% although the number of cases was low at 187. On the other hand, Karnataka (4.6% rise) and Gujarat (4%) showed modest increases but have been recording a relatively high number of cases. Karnataka posted 2,879 fresh cases during the week (February 15-21), the fourth highest in the country after Maharashtra, Kerala and Tamil Nadu. In Gujarat, the week’s case count was 1,860.

While Delhi also saw a 4.7% spurt in infections, the absolute numbers are still pretty low in the capital with 954 fresh cases reported in the week.

Meanwhile, in another sign of a resurgence in the pandemic, India recorded 10,570 fresh cases on Monday. This was the highest count for a Monday in the past six weeks. Cases dip every Monday due to lower testing and staff shortages over the weekend.

However, the death toll is not rising. On Monday, 77 fatalities were recorded in the country, the lowest single-day toll since May 3 last year. Punjab on Monday reported 389 cases, the highest since December 23, and as many as 15 deaths.

After a surge in daily Covid-19 cases for the last six days, Maharashtra and Mumbai reported a slight dip on Monday that officials attributed to fewer than usual tests on Sunday. But the rising graphs in the Vidarbha region led to the imposition of more localised curbs.

In Maharashtra, the highest addition of cases came from the Mumbai circle, including MMR, at 1,364 cases, followed by the Akola circle that reported 1,154 cases. Nagpur region was the third, contributing 946 cases. Among civic corporations, Nagpur and Amravati reported 643 and 555 cases, nearly as many as Mumbai.