68 Dies In Lightning In UP, MP. PM Modi Announces Compensation For Bereaved 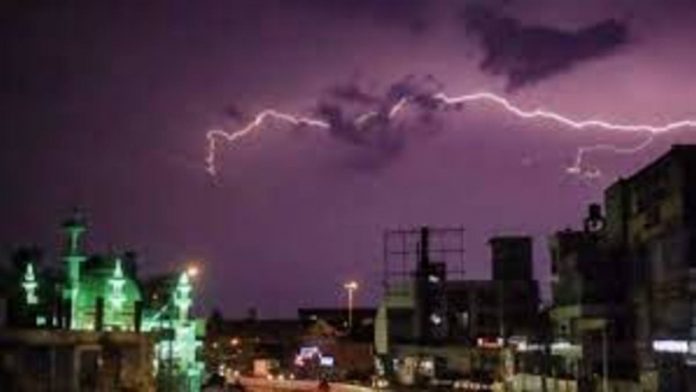 On Sunday, 68 individuals were killed in separate lightning strikes in Uttar Pradesh, Madhya Pradesh, and Rajasthan.

On Monday, the death toll in Uttar Pradesh from intense lightning rose to 41, while seven people were confirmed dead in Madhya Pradesh.

On Sunday, lightning struck Rajasthan, killing 20 people. Seven of the victims were children from the districts of Kota and Dholpur. Over ten additional people have been injured, according to reports.

Prime Minister Narendra Modi has promised ex-gratia payments of Rs 2 lakh to the relatives of those killed in lightning strikes in all three states, as well as Rs 50,000 to the injured.

Rain fell in parts of UP’s Prayagraj, killing 14 persons in different occasions after being struck by lightning. Kanpur Dehat and Fatehpur each lost five individuals, Kaushambi four, Firozabad three, and Unnao, Hamirpur, and Sonbhadra one each. In Kanpur Nagar, two people died, and in Pratapgarh Hardoi and Mirzapur, one person died.

In Rajasthan, lightning has claimed the lives of 20 people
On Sunday, 20 persons were killed by lightning strikes in various districts of Rajasthan. Over ten additional people were injured, according to reports.

Eleven people from Jaipur, three from Dholpur, four from Kota, one from Jhalawar, and one from Baran were among the dead.

Sunday had already resulted in the injuries of 17 individuals. They were rescued by police and SDRF troops working together. The injured were brought to Jaipur’s Sawai Man Singh Hospital.

According to reports, 11 persons were killed in Jaipur’s Amer district on Sunday when sky lightning struck the watch tower twice in less than 40 minutes.

Due to strong lightning on Sunday, four children died in Rajasthan’s Kota district, while three others died in Dholpur’s Badi district.

On a day when heavy rains drenched different sections of the state, sky lightning struck numerous parts of Rajasthan, signalling the entrance of the monsoon in the desert state.

PM Modi has announced an ex-gratia payment of Rs 2 lakh to the kin of the deceased
PM Modi expressed his sorrow over the deaths suffered by lightning strikes in the states of Uttar Pradesh, Madhya Pradesh, and Rajasthan. He declared a Rs 2 lakh ex-gratia payment from the Prime Minister’s National Relief Fund (PMNRF) to the relatives of those who died. He also approved a financial help package of Rs 50,000 for people injured in the disaster across the three states.

PM Modi took to Twitter and tweeted in Hindi, which roughly translates to English as, “In several parts of Rajasthan, many people have died as a result of lightning. This is heartbreaking. I send my heartfelt sympathies to the families who lost loved ones.”