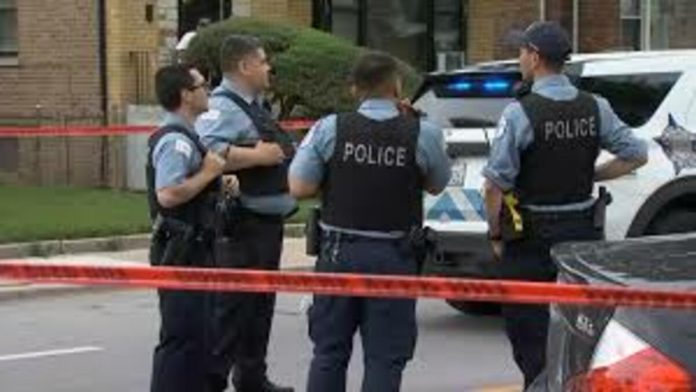 A shooter on Monday in US with high-powered rifle opened fire that killed 6 people and injured more than 36. The man open fire from a rooftop at the Chicago suburb of Highland park. Police has however arrested the suspected man in shooting.

In an announcement, the police has told that they have arrested a 22-year-old Robert E Crimo III.

In a video, the police was seen surrounding a car and Crime exiting the car with his raised hands. Crime was also seen lied flat on the ground before he was taken into the custody by the police.
The man will be charged soon, said the Police.

The abrupt shooting erupted panicked mayhem when toddlers left their tricycles and parents started running to safety taking along their children. The scene was turned to a mayhem from patriotism within a few minutes after the shooting begin.

A retired doctor Richard Kaufman who was from the street where the firing happened said, he heard around 200 shots and that “it sounded like fireworks going off”.

“It was pandemonium. A stampede. Babies were flying in the air. People were diving for cover,” he further said. “People were covered in blood tripping over each other.”

Jim Anthony, a spokesperson from the North Shore University Health System said, over 36 people were injured by the gunshots. Around 26 victims aged between 8 and 85 we’re rushed to Highland Park hospital, said an emergency room doctor.

Out of those killed in the incident were a Mexican national, said an official from Mexican Foreign Ministry on Twitter.

At the independence celebration, children who were waving American flags and riding tricycles were suddenly pulled by their parents after the gunshots heard and crowd started screaming.

Another video that went viral from the incident recorded sound of 30 bullets being fired, then a break and again another 30 shots were heard with a woman saying from a side parade route, “My God, what happened?”

Soon after the incident, the country’s Sheriff’s Office posted a wanted poster of Crimo online, showing a thin-faced bearded man with tattoos on face and neck.

The shooting was done from a rooftop, that the Gunman reached by an unsecured ladder that was attached to the building, said the police.

Hearing about the incident, President Joe Biden and wife Jill said that they were “shocked by the senseless gun violence that has yet again brought grief to an American community on this Independence Day.”

President Biden also said that he “surged federal law enforcement to assist in the urgent search for the shooter.”

Referring to a newly signed legislation of bipartisan gun-reform, he said that much more needed to be added to legislation adding, “I’m not going to give up fighting the epidemic of gun violence.”