44 Arrested after the clash at the Singhu border

The clash took place at the Singhu border between the farmers and the locals claiming to be the residents of the area. 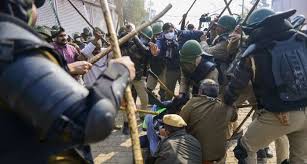 Another protesting site Ghazipur where the farmers refused to vacate despite the Ghazipur administration’s order to vacate the site. Thousands of farmers came on Delhi-Meerut Expressway for the demonstrations. Due to a standoff and tearful outburst by one of the senior leaders of the farmers the security forces were called again at the site to monitor the situation.

The man with the sword was believed to be one of the protesting farmers who had allegedly attacked a group that barged into the protest site in Singhu, despite heavy police presence, vandalised the protesters’ tents and broke their washing machines.

When the police reached the Ghazipur border there was a clash between the farmers and the local residents of that area, pelting stones at each other. One of the Delhi Police official got injured during the clash.

Thousands of farmers at Ghazipur and many more are expected to come to observe a fast from 9 am to 5 pm, today 30 January, on Mahatma Gandhi’s death anniversary.

The size of the mob increased after the video of a farmer from BKU Rakesh Tikait got viral and the district officials estimated the size to be of around five to six thousand.

Many opposition leaders including Congress leader Rahul Gandhi condemned the centers actions towards the farmers.

Gandhi also asserted that if the issue is not resolved then the agitation will spread all across the country and the only solution to overcome this problem is to throw the three farm laws into the “wastepaper basket”.