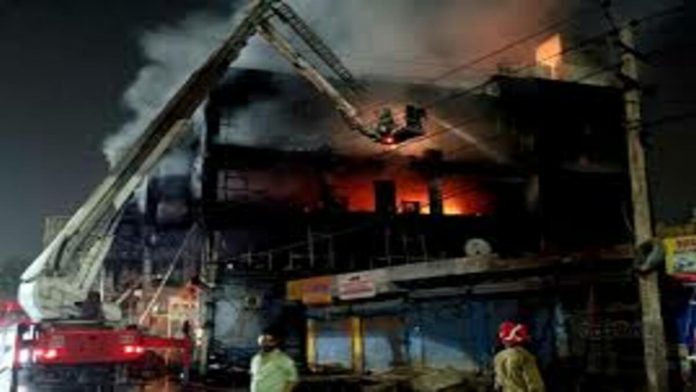 A massive fire broke out in a four storey building in Delhi’s Mundka on Friday evening that killed at least 27 people and injured 12, said the police.

Soon after the incident, the injured were sent to Sanjay Gandhi Hospital for their treatment. At least 50 people were safely rescued from the site but some are were still feared trapped. The police has however yet not revealed the identities of the victims.

The Delhi fire Brigade saved people by deploying cranes. Some even jumped off the windows to save themselves and some others came down using ropes, as the smoke from fire was spread all around the building.

The Deputy Police Commissioner of Police Sameer Sharma told that the fire begin from the first floor which has the office of a CCTV camera and router producing company. The owners of the company – Varun Goel and Harish Goel have been arrested by the police.

The owner of building, Manish Lakra had no safety clearance from the fire department and he is being missing from the incident, said the police.

As per the preliminary investigation, most deaths happened on the second floor of the building as a motivational speech event was going on this floor when fire broke out and many people were attending that event.

The information about the fire was received around 4:40 pm after which 24 fire tenders were hurried to the scene, said the fire department.

The reason why people were unable to escape the building was that there was only one staircase in the building, said the divisional officer of the fire department.

Meanwhile, the Union Home Minister Amit Shah said that he is in continuous conversation with the officials and that the National Disaster Response Force (NDRF) has been sent to the site.