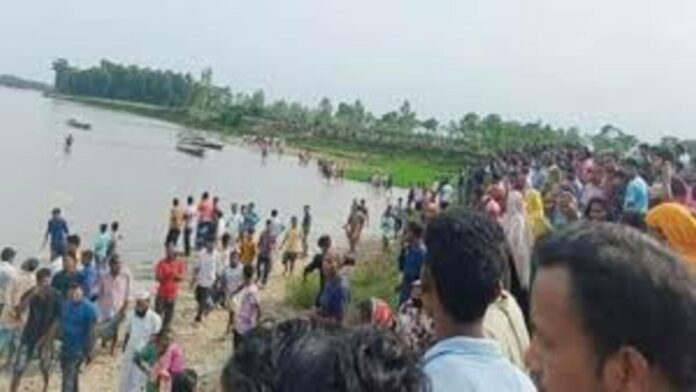 According to officials, a boat transporting Hindu worshipers to a centuries-old temple capsized on a river in northwest Bangladesh on Sunday, killing at least 24 people, including children and women.

At least 25 more people are still missing after the tragedy in Bangladesh’s Panchagarh area, thus the death toll is certain to increase further.

On Mahalaya, the auspicious beginning of the Durga Puja season, the worshippers were travelling to the Bodeshwari Temple when the boat capsized in the Korotoa River.

“So far, the catastrophe has claimed the lives of almost 24 people, including 8 children and 12 women. When they were taken to a nearby hospital, some of them were pronounced dead, Solaiman Ali, the administrative head of Panchagarh’s Boda sub-district, informed reporters.

He added that the number of passengers was believed to be between 70 and 80 and that searches for the missing were being conducted by local divers and firefighters.

Some survivors who were able to swim to shore are now helping with the rescue efforts.

The engine-powered boat, according to Ali, was transporting Hindu worshippers to the centuries-old Bodeshwari Temple.

Zahurul Haque, the administrative chief or deputy commissioner for Panchagarh, claimed that the boat appeared to be overloaded with passengers.

Each year during the Durga Puja, which started in Bangladesh on Sunday, thousands of Hindus from the Muslim-dominated country of Bangladesh visit the Bodeshwari Temple.

In separate comments, both Prime Minister Sheikh Hasina and President Abdul Hamid offered their sympathies to the families of the deceased.

Local officials were requested to take action for the treatment of survivors and payment of the deceased.

The largest Hindu holiday in Bangladesh and eastern India is the Durga Puja.

Several hundred rivers crisscross deltaic Bangladesh, and hundreds of people pass away every year in boat and ferry accidents there, mostly because of overcrowding.

After an overloaded speed boat collided with a bulk cargo carrying sand and drowned on the Padma River in May, 26 people perished.