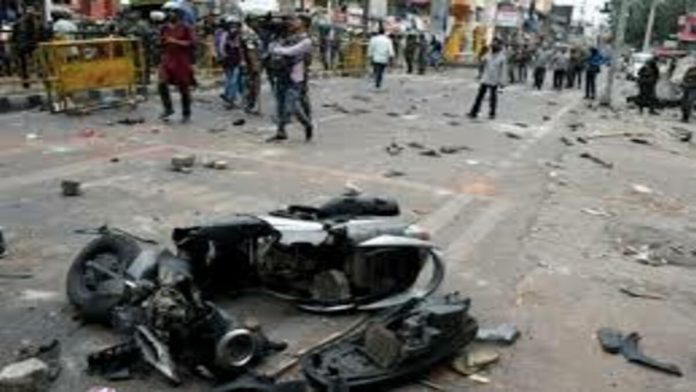 As protests erupted around the country on Friday against disparaging allusions to the Prophet made by former BJP spokespersons Nupur Sharma and Naveen Kumar Jindal, at least two people were killed by bullets in Ranchi, Jharkhand, as police fired into the air to disperse a gathering pelting stones.

Protests in Prayagraj, Uttar Pradesh, and Howrah, West Bengal, became violent. Even though there was a shutdown in Srinagar, the protests in Delhi and parts of Madhya Pradesh, Telangana, Gujarat, Bihar, and Maharashtra were calm.

The Shahi Imam in Delhi distanced himself from the demonstration and begged for forgiveness. Meanwhile, the All India Muslim Personal Law Board (AIMPLB) urged Islamic academics and intellectuals to refrain from participating in “those television debates whose primary purpose is to…insult Islam and Muslims.” Sharma made his remarks during a television debate.

The demonstrations came only days after Sharma and Jindal’s remarks were condemned by more than a dozen countries, including Gulf states, with India stating that they “do not reflect the views of the Government.” Since then, Sharma has been suspended and Jindal has been expelled from the BJP.

Ranchi SSP Surendra Jha, another officer, and a constable were injured when police fired into the air to disperse a crowd throwing stones. A stone struck Jha’s helmet, causing him to suffer a concussion. Prohibition orders were later issued by the district government in the Main Road area.

“Two of the demonstrators perished,” said SP Ranchi (Rural) Naushad Alam. Others who have been admitted to the Rajendra Institute of Medical Sciences have suffered injuries as a result of stone-pelting and pellets.”

According to police officials, the situation deteriorated after a vehicle collided with a group of demonstrators. According to the reports, police are also looking into how the bullet damage occurred.

In Prayagraj, where violent stone-pelting resulted in minor injuries to many police officers, the protests also spiraled out of control. Late in the evening, Chief Minister Yogi Adityanath convened a conference with senior officials, ordering them to take “the most stringent action against anyone involved in violent and unlawful rallies in the state.”

According to the UP Police, 45 individuals were arrested in Saharanpur, 37 in Prayagraj, 23 in Ambedkarnagar, 20 in Hathras, seven in Moradabad, and four in Firozabad as a result of the protests.

Violence erupted within the Khuldabad police station limits, according to Prayagraj SSP Ajay Kumar, as youngsters gathered on the streets long after the afternoon prayers had ended. “Among them, there were a lot of children.” We dispersed them with light force. Even after that, people continued to gather in lanes and shout slogans. The forces have suffered a few minor injuries. Kumar stated, “The situation is under control.”

“The Rapid Action Force has been dispatched, along with four PAC companies. More troops are expected to arrive from neighboring districts. The tyre of one rickshaw was set on fire, but it was quickly extinguished. An attempt was also made to set fire to a PAC vehicle. “Further action will be taken based on the findings of the inquiry,” the SSP stated.

The police in Moradabad and Firozabad, as well as Saharanpur District Magistrate Akhilesh Singh, published statements claiming that the protests were peaceful and that the situation was under control.

The police in Ambedkarnagar blamed “nine youths in the age group of 15-20 years” for stone-pelting in the Tanda neighborhood. “We dispersed them with light force.” They stated, “We have identified the accused.”

“Some people sought to hold a protest without authorisation” within the Sikandra Rau station grounds, police said in Hathras. “The cops chatted with them and then sent them back… “More action is being taken,” the police said.

Prohibitory orders were issued in many sections of Howrah, West Bengal, when demonstrators attacked a police station and set fire to a few kiosks, as well as several two-wheelers and automobiles. At least 12 police officers were hurt, according to officials.

Even as the opposition BJP claimed that its offices in the Uluberia and Panchla districts were targeted, Governor Jagdeep Dhankhar called the state’s chief secretary H K Dwivedi.

Dhankhar also mentioned a call from Leader of the Opposition Suvendu Adhikari, as well as “other inputs to our office,” and said a “view has to be taken” on the deployment of central forces “in this dreadful circumstance.”

To disperse a mob that had stopped a national highway in Dhulagarh, police deployed batons and tear gas shells. In Domjur, protesters stormed and vandalized a police station. “There was property damage, but no significant injuries have been reported.” A senior police official stated, “The situation is being brought back to normal.”

“What Nupur Sharma said is highly condemnable,” said State Transport Minister and Kolkata Mayor Firhad Hakim. However, this does not imply that you go out on the streets and agitate. Hooliganism has no place here.”

In J&K, all businesses in Srinagar were closed, and mobile internet services were disrupted for the majority of the day before being restored late in the evening. The protests took place a day after an indefinite curfew was imposed in Kishtwar district and Bhaderwah town in Doda district, as well as prohibitory orders across the Chenab Valley as a whole.

Protesters marched to the Additional District Magisterate’s office in MP’s Chhindwara district, where they handed over a memorandum seeking Nupur Sharma’s arrest. In Vidisha, a similar memorandum was also presented.

Protests were reported in Vadodara and Ahmedabad, where shops in numerous locations remained closed. Protests were also recorded in the Bihar districts of Bhojpur, Muzaffarpur, and Nawada.

For a brief period of time, tensions rose outside the Mecca mosque in Hyderabad, as numerous demonstrators gathered to raise anti-BJP slogans.