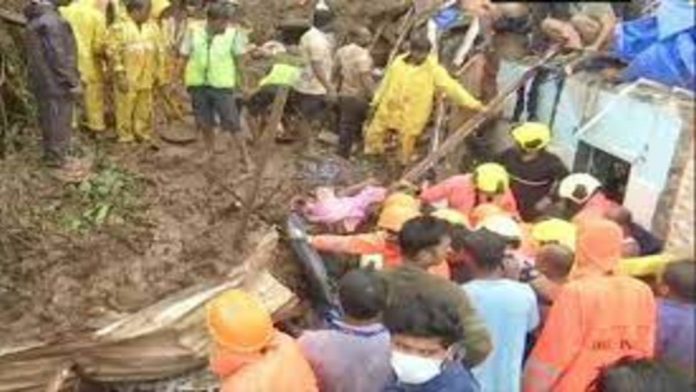 At least 15 people have died after getting trapped under the rubble of their homes in Mumbai’s Vikhroli and Chembur areas due to heavy rains that hit the city late night yesterday and this morning. A red alert has been issued in the city and people are asked not to come out.

According to BMC, a ground-plus-one residential building has collapsed in Vikhroli in the morning hours of Sunday that has killed three people.

Around 15 people from Chembur’s Bharat Nagar area and 9 from Vikroli’s Surya Nagar have been rescued, said officials and those who were injured have been transferred to nearby hospitals. Rescue operation is still in process as more people are feared to be trapped.

“Three bodies have been recovered and 5-6 more people are feared trapped in the debris of the building that collapsed in Vikhroli area following incessant rainfall in Mumbai,” told Ashish Kumar, NDRF Deputy Commandant to media.

The visuals of Borivali east area showed cars being swept away by the undercurrents.

The Central and Western Railway in Mumbai are also suspended due to heavy water logging in the tracks due to the hours long rains.

Various long distance trains were also suspended on the Central and Western Railway.

The India Meteorological department (IMD) has forecasted that Mumbai will receive heavy to heavy rainfall for next five days.