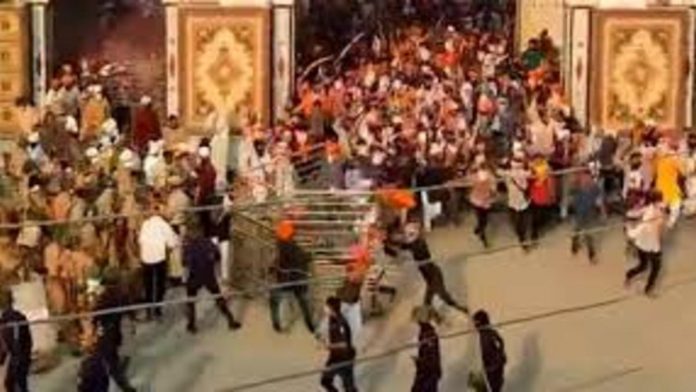 About 14 people have been arrested in connection with the attack that happened at a gurudwara in Nanded on Monday. In the attack the miscreants had assaulted the policemen and vandalized property and vehicles outside the gurudwara.

A case has been registered against 64 accused with the charges of an attempt to murder and rioting said the Nanded police.

In the attack a sword-wielding mob went on rampage outside the gurudwara and attacked four policemen because the authorities had denied for a public procession in Maharashtra’s Nanded due to Covid-19 pandemic.

A video of the incident got viral that showed the sword-wielding mob bursting outside the gurudwara, breaking barricades, attacking policemen and also vandalizing property and vehicle. The four policemen were heavily injured and several vehicles were damaged.

“Permission for the Hola Mohalla public procession was not granted due to the pandemic. The gurdwara committee was informed and they had assured us that they would abide by our directives and hold the event inside the gurdwara premises,” told Nisar Tamboli, Nanded Range DIG.

“However, when the Nishan Sahib was brought at the gate around 4 PM, several participants started arguing and over 300 youth stormed out of the gate, broke the barricades and began attacking the policeman,” said Tamboli.

The DIG also said that the condition of one of those four injured policemen was very serious and a total of sic police vehicles were vandalized by the mob.

Earlier the DIG had also said that at least 200 people would be arrested in connection with the violence and the cases will be filed under the Sections 324 (voluntary causing hurt with dangerous weapons), 307 (attempt to murder), 188 (Disobeying the order of public servant), 269 (Negligent act likely to spread infection) of the Indian Penal Code (IPC) and for rioting.

Hola Mohalla (Hola) is solely as festival of Sikhs is celebrated a day after Holi. On this festival the Sikhs demonstrate their martial arts.

Nanded is a significant Sikh pilgrimage as it is home to a consecrated place of worship, the Takht Sachkhand Sri Hazur Abchal Nagar Sahib. It was here that the tenth and last Sikh Guru, Guru Gobind Singh (1666-1708), blessed the sacred book Guru Granth Sahib as the everlasting Guru of Sikhism and went through the last 14 months of his life.