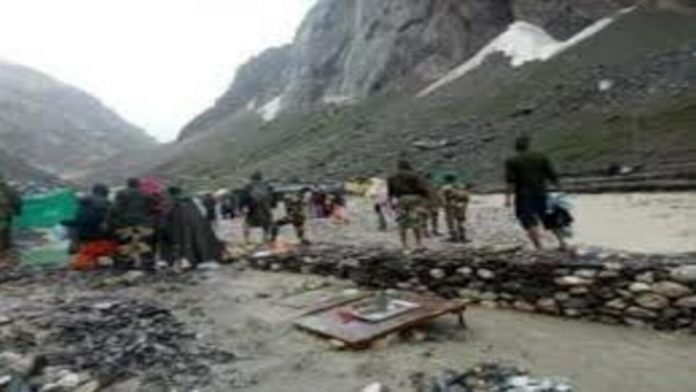 According to officials, a flash flood caused by a cloudburst that struck a camp close to the Amarnath cave shrine in J&K’s Ganderbal district on Friday resulted in at least 12 fatalities and 25 injuries.

Around 6 pm, a cloudburst occurred, causing a flash flood that destroyed a portion of the camp and officials estimate that at least 25 tents were damaged.

According to Divisional Commissioner (Kashmir) K Pandurang Pole, at least 12 people have died at the camp, and 25 more have been hurt and are being treated. Both the Anantnag and the Ganderbal routes are open. As per custom, the yatra was stopped overnight.

Pole said that the camps’ electrical and communication infrastructure is working properly. “The camp has space for about 3,000 individuals. Around six o’clock, when most pilgrims were either trekking or leaving for dinner, the event occurred, he added.

According to J&K Police, NDRF, and security personnel, rescue activities are being carried out, according to IGP (Kashmir) Vijay Kumar. He stated that the situation is “in control” and that the injured are “being flown for care.” The deceased’s identities have not yet been determined.

Prime Minister Narendra Modi expressed sorrow over the deaths and assured those impacted that “all feasible support is being provided.” Modi claimed to have discussed the subject with J&K L-G Manoj Sinha. He tweeted, “Rescue and relief operations are in way.”

Rescue personnel have reportedly been dispatched to the area, and instructions have been given to offer “all required help to the pilgrims,” according to Sinha. He claimed that Amit Shah, the Union Home Minister, and Prime Minister Modi “had assured all the help.”

“Directions have been given to offer pilgrims with all essential support. I’m keeping a careful eye on everything, Sinha added. Shah stated on Twitter that saving lives is the top goal.

Omar Abdullah and Mehbooba Mufti, both former chief ministers of J&K, expressed worry for the security of pilgrims. While Mufti tweeted that she was “grieved & startled,” Abdullah wrote that he was “very saddened by the reports of loss of precious life.”

The management of the Amarnath temple has established helplines for pilgrims and their families. The yatra was scheduled to last 43 days and started on June 30. Following the pandemic and the removal of J&K’s special status in August 2019, it was organized after a two-year hiatus.